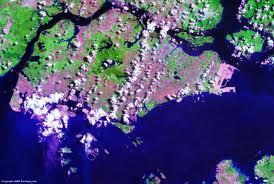 FULL LEVEL: The most recent photo of the reservoir at Bakun Dam
KUCHING: The impoundment of the Bakun Dam reservoir, which commenced on October 13, 2010, has reached the full supply level of 228m above sea level (asl) as of last Friday.
Sarawak Hidro Sdn Bhd (SHSB) managing director Zulkifle Osman said the size of the reservoir was now over 695 square kilometres, which is a water body equivalent to the size of Singapore.
Despite this, he said based on SHSB’s spillway operation rule, the reservoir would have to be lowered six metres to eight metres below the full supply level.
It has to be maintained at this level until such time the Sarawak Electricity Supply System load increases to allow the reservoir to operate over its full range, he added.
The additional release for reservoir lowering is scheduled to commence today.
“The lowering of the reservoir level also serves as an important purpose in providing flood storage of the reservoir, and hence reducing the peak spillway discharges during floods, thereby regulating floods downstream,” he said in a statement.
He also mentioned that since November 11 last year, Bakun Dam has been continuously releasing about 500 cubic metres per second (m3/s) of water through its spillway, and up to 300 m3/s from the powerhouse for power generation to enable unrestricted river traffic, especially for passenger express boats travelling between Kapit, Belaga and Bakun.
As for today’s scheduled reservoir lowering, he said the total discharge  downstream would be three times more, at 2,500 m3/s.
“This is approximately 1.6 times the long term average flow of Batang Balui (1,500 m3/s), but much lower than high flow of the river. It is anticipated that with this additional discharge, the downstream river level will rise further, and the river flow will become swifter.
“As such, river users and inhabitants downstream of the dam are hereby advised to take extra precautions on the rising river level and fluctuating river flows.”
He also said SHSB, as owners of Bakun Dam, wish to express their sincere appreciation to the downstream folks for their understanding and cooperation during the impoundment period.
“The downstream river users have benefitted from almost uninterrupted river travel.”

Posted by Phd in Economics at 3:15 PM