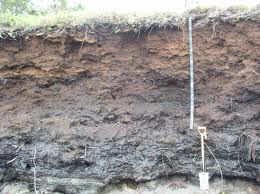 TECHNICAL EXHIBITS: Manyin (second left) taking a closer look at one of the exhibits on display at the SEIC exhibition booths in the company of other guests.— Photo by Jeffrey Mostapa
KUCHING: Engineers designing roads in the state face a major challenge of building them over peat soil which makes up 15 per cent of the state’s land.
Minister of Infrastructure Development and Communications, Dato Sri Michael Manyin said the peat soil could reach a depth of 30 metres.
“When we build roads on peat soil running as deep as 30 metres, which is more than 100 feet, the road may be useable in the beginning but after two years, the road surface will become undulating,” he said when officiating at the opening ceremony of Soft Soils Engineering International Conference 2013 (SEIC) at a hotel here on behalf of Chief Minister Pehin Sri Abdul Taib Mahmud yesterday.
He hoped SEIC, jointly organised by Universiti Tun Hussein Onn Malaysia (UTHM) Research Centre for Soft Soils (RECESS) Centre of Excellence and Faculty of Civil Engineering and Environment (FKAAS), and the university’s involvement in soft soil research in the state could help identify effective solutions for the development of infrastructure in Sarawak.
“I hope participants will touch on these challenges in their deliberation at this conference,” he said.
The three-day conference is jointly organised by Universiti Tun Hussein Onn Malaysia (UHTM) Research Centre for Soft Soils (RECESS) Centre of Excellence and Faculty of Civil Engineering and Environment (FKAAS) in collaboration with seven organisations including Ministry of Infrastructure Development
and Communication, Sarawak Public Works Department (JKR) and Universiti Malaysia Sarawak.
Manyin said the involvement of several Sarawak-based companies the conference could bring significant impact to the state’s development. UTHM’s involvement in soft soil research in Sarawak could help identify effective solutions for the state’s infrastructure development.
He said: “We welcome UTHM to spread its wing to Sarawak as we need 200,000 to 300,000 engineers in the years ahead.”
Meanwhile, UHTM vice-chancellor Prof Dato’ Dr Mohd Noh Dalimin said SEIC aimed to create a platform for knowledge-sharing between universities, government agencies and industries in relation to construction in soft soil areas.
“Through the conference, we hope to organise academic programmes that create awareness among participants of the challenges and achievements in the field of soft soil engineering while generating income for RECESS Fund that would activate research activities related to soft soil engineering,” he said in his welcoming address.
A total of 172 delegates from countries such as Japan China, Nigeria, Yemen, Indonesia, Sri Lanka, Singapore and Malaysia are participating in SEIC where four keynote speeches, 11 invited papers and 40 technical papers will be presented.
When contacted, Works Minister Datuk Fadillah Yusof said his ministry would be obtaining recommendations and resolutions from SEIC for further studies.
“We will be taking in the resolutions to be studied to further improve and maintain roads in Sarawak,” he said.

Posted by Phd in Economics at 6:07 PM