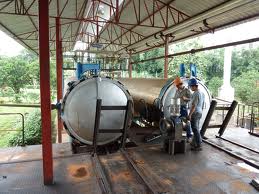 by Jasmine Chin. Posted on October 5, 2011, Wednesday
KUCHING: There is so much of untapped potential lying in Sarawak’s oil palm industry and as far as industry experts are concerned, with the right steps taken ahead, the state has the capability to exceed the targeted 23 per cent oil extraction rate (OER) by 2020.
“There is so much of potential in the oil palm industry in Sarawak, hence if we’re talking about OER, the state can definitely exceed the 23 per cent target,” said veteran specialist of the oil palm industry, Mahbob Abdullah to The Borneo Post in an email interview.
What mattered most now according to him was the right strategies taken to reap more OER from the current amount retrieved from these palm trees.
“Sarawak must have adequate manpower who are well-trained to do the harvesting efficiently, and with reduced number of bunches which are unripe. The adequate labour force will also enable full collection of loose fruit. Fruit quality has to improve by removing sand and dirt that can arrive at the mill. Fruit harvested must arrive at the mill on the same day while it is still fresh,” he pointed out.
In Sarawak, labour shortage was severe, not only in the managers and engineers segment, but in other levels of the workforce as well.
“The shortage of workers has resulted in losses of millions of ringgit revenue each year. Bunches are not fully harvested, and as fertiliser application is not done on time, the productivity of the palms begins to drop,” Mahbob stressed.
Group managing director of Sarawak Plantation Bhd, Datuk Hamden Ahmad took a similar stance in this matter by noting that the oil palm sector was currently suffering from labour shortages.
“The reason why the players in the industry rely heavily on the inflow of Indonesian workers is because we lack the input of labour in our own domestic market,” he said in an exclusive interview with The Borneo Post.
According to Hamden, the industry was experiencing an estimated 10 per cent to 15 per cent shortage in the labour department, especially in the harvesting process.
Additionally, the right management skills were vital if the oil palm industry was to flourish even more.
As such, Mahbob was quick to reiterate that the level of management skills would need to be raised so that planning, supervision and control could be improved.
“Effective management controls and improved equipment at the mills can reduce the losses of oil during processing. Planting and replanting with improved material will raise the oil content in fruit,” Mahbob underscored.
However, general of MPOB, Datuk Dr Choo Yuen May opined to The Borneo Post that OER in Sarawak was not low compared with other states in Malaysia.
“For the first eight months of this year,    OER in Sarawak was the highest compared to Sabah and Peninsular Malaysia. The OER in Sarawak averaged 20.64 per cent, while Sabah recorded 20.52 per cent and Peninsular Malaysia registered 20.02 per cent. This puts Malaysia’s average OER at 20.26 per cent.
“However, Sarawak’s OER at 20.64 per cent, was lower by 1.9 per cent compared with that of the corresponding period last year mainly due to poor fruit formation from young trees coupled with excessive rainfalls in the first quarter of this year, which  impacted the January to August 2011 OER performance,” she said.
In terms of oil palm planted area, Sarawak which has 971,611 hectares, has been the second largest state after Sabah. However, in terms of CPO production, Sarawak was the fourth producing state after Sabah, Johor and Pahang, contributing 2,179,601 tonnes or 12.8 per cent of total Malaysia CPO production last year.
The main factors according to Choo was premised on lower yield arising from poor  fruits formation from young matured areas (three to six years old trees) covering 323,706 hectares or 33 per cent of total Sarawak oil palm planted area. This however would improve over time.
Another significant contributing factor to lower yield for both fresh fruit bunch and OER would be the unfavourable weather experienced this year.
“In Sarawak,  production per palm was far lower than the crop I could see there. The figures on record showed that the yield in Sarawak was among the lowest, with only 15 tonnes per hectare last year,” Mahbob added.
These figures were for plantations, which had organised management.
“For most smallholders, the figures will be far lower. There are exceptions of course. For example if the palm could produce 16 bunches a year, and assuming each bunch is 15 kilogramme, and for a hectare of 138 trees, the yield could be over 30 tonnes per hectare, or double the performance seen now,” he said.
Posted by Phd in Economics at 9:54 PM