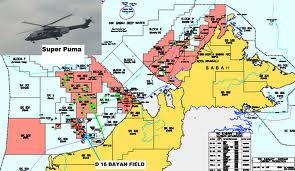 Borneo Post March 29, 2012, Thursday
KUCHING: Petronas signed a Heads of Agreement (HOA) with Total of France to jointly study the development and production potential of K5, a high carbon dioxide gas field offshore Sarawak. Discovered in 1970, the gas field K5 has 70 per cent carbon dioxide content and it is located approximately 230 kilometres from Bintulu in water depth of 80 metres.
Petronas said in a press statement yesterday that K5 would be the first gas field with more than 50 per cent carbon dioxide content to be developed in Malaysia.
Under the HOA, Petronas’ newly established upstream research unit Exploration and Production Technology Centre and Total would explore the possibility of developing the field in ways that were technically, commercially and environmentally viable. The HOA was signed at the Kuala Lumpure Convention Centre where Petronas was represented by Petroleum Management vice president Ramlan Abdul Malek and Total was represented by Total E&P Malaysia general manager Vincent Dutel.
The scope of the study would also include the development of carbon dioxide management technologies in the area of carbon capture, transportation and sequestration.
The study was set to commence immediately and would take 15 months to complete.

Posted by Phd in Economics at 9:31 PM